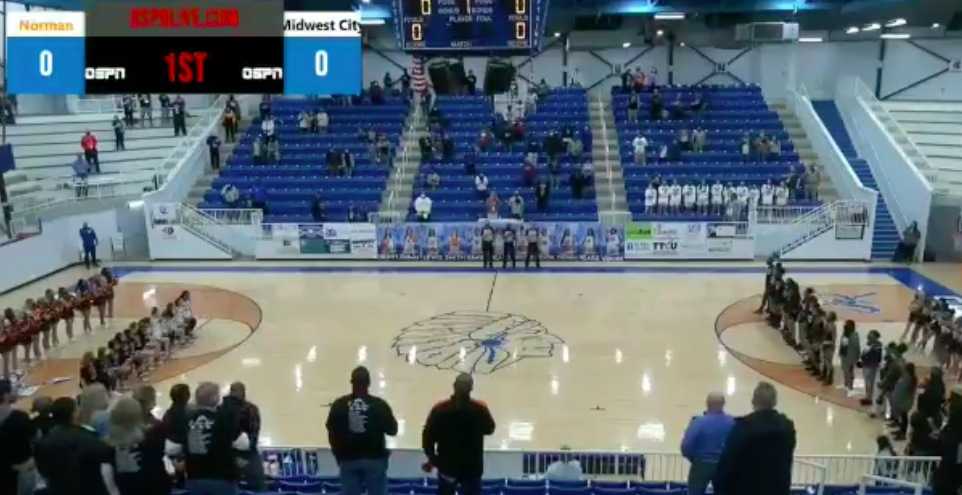 As much progress is tried to be made in America against racism, the technology of the world today shows and proves that we have a long way to go, as what was once hidden and denied goes live and viral in matter of seconds.

During the pandemic High School basketball has tried to march on.  Instead of having a live audience a lot of games are streamed live for fans to enjoy whole everyone stays safe.  On Thursday night in Oklahoma,  Norman High’s girls’ basketball team took to the floor against Midwest City.  During the customary playing of the National Anthem the young ladies of Norman High School basketball decided to take a knee.  An outraged High School announcer decided to verbally voice his displeasure but obviously forgot that they were live streaming and that his mic was hot when he said “F****** N******…I hope Norman gets their ass kicked”

OSSAA released a statement from NFHS on its website saying they condemn racism while apologizing and that whey would investigate the incident.  No release of names or firing has been made at this time.

Hey @NFHSNetwork looks like you forgot to cut the Mic!!! “F****** N******” is the one that really got me!! Tell us how you really feel!! THIS IS WHY THEY KNEEL!!!@Migliorino_Nick @tohara_o @NHS_AthDept @gonormantigers pic.twitter.com/mmWQAecLaF

Tristan Thompson Has Got Some Serious Wanna Be Baby Mama Drama

Kirk Franklin Recorded Cussing His Son Out Now Apologizes...Did He Need To Apologize? [VIDEO]
Next Post